The Chains that Rust 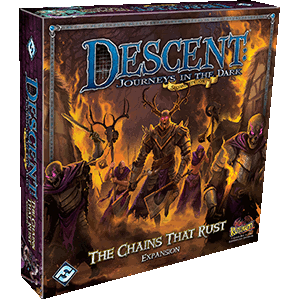 Box of The Chains that Rust

In the Mistlands, the dead rest uneasy. Some say the swirling mists that cover this entire land are truly the spirits of the dead, wandering through the living world in search of warmth. Others say the mists are the exhalations of undead warriors, trapped beneath the ground until they can escape. Even if the mists are only mundane, the heroes will fight countless enemies as they try to escape the Mistlands, and some will rise from death to charge into battle again and again.

The Chains that Rust is the seventh expansion for Descent: Journeys in the Dark (Second Edition). It is a small box expansion that can also be combined with Mists of Bilehall, to be played as a single long campaign.

The new condition added in this expansion is Terrified, previously also added in Mists of Bilehall.

All the cards and sheets found in this expansion are marked with The Chains that Rust expansion icon to distinguish these components from those found in the base game.