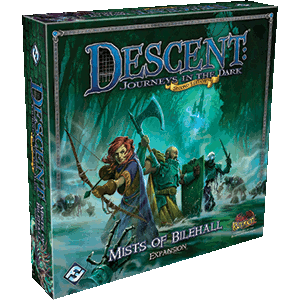 Box of Mists of Bilehall

For the mini campaign, see Mists of Bilehall (campaign).

A strange curse taints everything. It clings to the flesh and lingers within the lungs, a poison that destroys the soul while leaving the body to shamble on. A small settlement of the damned has formed near the border, a collection of unfortunate trespassers now unable to leave the accursed land. You have joined their number, but not their despair. Ready your gear and bolster your courage; your journey into the Mistlands is about to begin.

The rumors of an undead army massing in the Mistlands have led you to journey closer to this cursed realm. Within the twisting, shifting mists, the servitors of Waiqar the Undying bicker and maneuver for power, preying upon each other until the day that Waiqar deems his forces powerful enough to march forth once more. This land is no friend to a hero of Terrinoth and as soon as you enter, you’ll feel the pervasive mists eating away at your very soul. Yet to uncover the truth behind the dangers within, you must enter the mists…

Strange tidings emerge from the Mistlands, seeping out of the ever-present fog. Long the domain of Waiqar and his servants, the Mistlands are rightly shunned by many—but a corrosive power that threatens all Terrinoth is now massing within the Mistlands’ borders.

Mists of Bilehall is the sixth expansion for Descent: Journeys in the Dark (Second Edition).

The new condition added in this expansion is Terrified.

All the cards and sheets found in this expansion are marked with the Mists of Bilehall expansion icon to distinguish these components from those found in the base game.