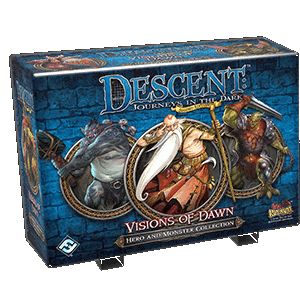 Box of Visions of Dawn

The ogres and trolls of Terrinoth have long warred between themselves, keeping them from presenting any threat to organized armies. But now, a truce has been forged, sworn on the skull of Ig’thalea, the warrior-priestess who shattered the last alliance between ogres and trolls. A foul army of ogres and trolls will sweep across Terrinoth unless a small band of heroes ends this alliance before it truly begins.

Visions of Dawn is the fifth Hero and Monster Collection for Descent: Journeys in the Dark Second Edition.

All the cards and sheets found in this expansion are marked with the Visions of Dawn expansion icon to distinguish these components from those found in the base game.