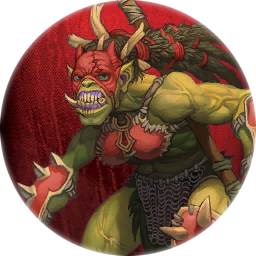 DJ30 Visions of Dawn
Race: Orc
Hero Ability
Once per round, after you defeat a monster with a Melee weapon, before removing its figure from the map, you may place your figure in any empty space adjacent to that monster.
Heroic Feat

: Choose any empty space within 3 spaces of your figure. Remove your figure from the map and place it in the chosen space. Then perform an attack. This attack gains Pierce 2.
Take your lessons from the wind: swift and constant striking as a howling gale.

Nara the Fang emerged from the darkness one night, a masked avenger driving bandits and rogues away from a loose collection of country villages. Suspicious and grateful in turns, the inhabitants of these settlements have made Nara a heated topic of gossip. They swear she can leap from rooftop to rooftop as she dispenses violent justice against the transgressor. Her true identity is frequently debated. The only hint comes from Nara’s namesake – her own missing fang. Now, the newly forged alliance between ogres and trolls threatens the villages that Nara has sworn to protect. She’ll do whatever it takes to destroy these monsters and safeguard her people.