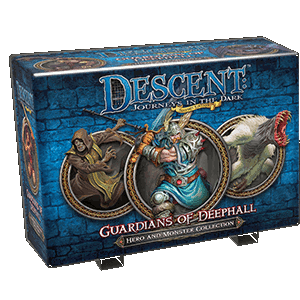 Box of Guardians of Deephall

The stronghold of Deephall was once home to a thriving, peaceful community, but now, the mountain city lies under constant threat of invasion. A horde of undead, led by dark priests, attacks Deephall constantly. These unending attacks deplete the city’s guards and erode the peoples’ resolve. Four heroes are all that stands between Deephall and the city’s extinction.

Guardians of Deephall is the fourth Hero and Monster Collection for Descent: Journeys in the Dark Second Edition.

1 Overlord card, "Power in Numbers" (Play this card during your turn and choose a map tile. If there are more monsters on that map tile than heroes, each hero on that tile suffers 1

, and each monster on that tile recovers 2

All the cards and sheets found in this expansion are marked with the Guardians of Deephall expansion icon to distinguish these components from those found in the base game.