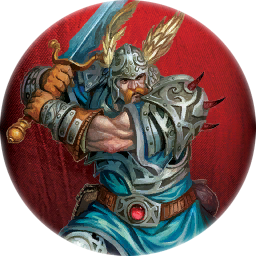 : Perform an attack, then you may move up to 2 spaces and perform another attack against a different target.
None fall faster than they that flee.

Years ago, Lord Hawthorne and his men lay under siege in Seragart. When they poured from the city gates in a final sortie, few expected victory. But the throng of barbarians fell beneath Lord Hawthorne’s blade, leaving their sorcerous warlord scrambling to retreat. Lord Hawthorne pursued the rout and closed in on the dark mage, but only severed a corner of his cloak. Lord Hawthorne swore then that his opponents would never again escape his blade. He has never broken his oath, and now he has sworn to protect the city of Deephall or die in the attempt!