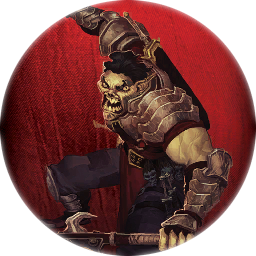 .
Heroic Feat
Use after you perform an attack that does not defeat a target. Perform an additional attack, using the same target. This attack adds 1

to the results.
Prejudice is only a mask for jealousy.

Mordrog has long fought to defend Terrinoth, but no matter how many monsters he slays, he remains unable to teach humans the true superiority of orcish nature. From his hunts in the Mountains of Despair to battles before Nerekhall’s gates, his accomplishments are ignored in favor of inferior human heroes. Such prejudice does not trouble Mordrog, however. He simply pities the humans for their weakness and lack of warrior spirit.

When Mordrog picks his target, he pursues it with dogged tenacity and unrelenting force.