Bonds of the Wild 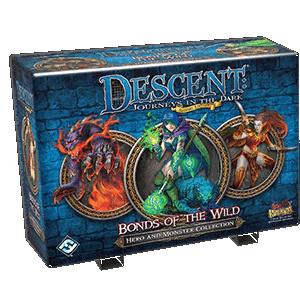 Box of Bonds of the Wild

For years, stories have been told of Mabinogi and the Tree of Life. In a time of plague, Mabinogi left his people to follow the tales of a tree that could heal sickness and resurrect the dead. He returned from his journey with a length of blackened wood clutched in his hands. It is said that sickness did not come to that town for many years and Mabinogi never revealed the location of the Tree of Life. As time passed the branch was lost, but recently, rumors have spread of a blackened branch hidden within a den of kobolds.

Bonds of the Wild is the sixth Hero and Monster Collection for Descent: Journeys in the Dark Second Edition.

All the cards and sheets found in this expansion are marked with the Bonds of the Wild expansion icon to distinguish these components from those found in the base game.