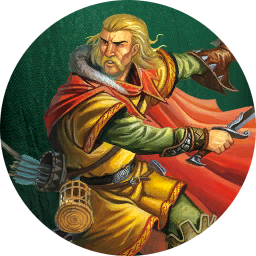 DJ31 Bonds of the Wild
Race: Human
Hero Ability
You have the Skye familiar. At the start of your turn, if Skye is not on the map, place him in your space.
Heroic Feat

: Skye performs a Melee attack with a blue, red, and yellow die.
This attack gains:

: Stun
If you train a falcon well, you begin to trust her more than your eyes.

Vyrah worked for a prestigious household as a falconer for many years. As a reward for his service, he was given first pick of falcon hatchlings, and he chose Skye. When the manor caught ablaze, it was Skye's screeches that woke Vyrah. Between Skye's warning and Vyrah's fast thinking, many of the birds and people were saved that night. Vyrah found strength and resolve he had never known, and devoted himself to saving others.