Ronan of the Wild

Ronan of the Wild 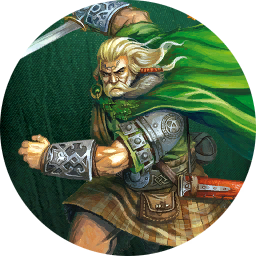 DJ31 Bonds of the Wild
Race: Human
Hero Ability
You have the Pico familiar. At the beginning of each encounter, place the Pico familiar token on your Hero sheet. During your turn, you may choose 1 search token within 3 spaces of you, and place Pico in it's place.
Heroic Feat
Use at the start of your turn if the Pico token is in your Hero sheet. Choose 1 other hero. You and that hero may immediately trade any Shop Item cards, Relic cards, and Search cards.
There's something unnatural stirring in the forest.

On the night of a great storm, a small band of soldiers took shelter from the rain and lightning in a large cave. While Ronan scouted the area outside, deep elves seized the rest of his company for trespassing. Ronan returned to the signs of struggle and immediately set off in pursuit of his captured compatriots. That night, Ronan earned a heroic reputation and an early resignation from the militia. Since then, he has sought peace among the sprawling greenery of the forest – but if a branch from the Tree of Life truly exists, it must be found and preserved for the sake of all living things.