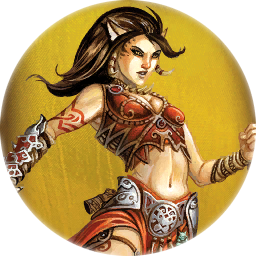 DJ31 Bonds of the Wild
Race: Katjie
Hero Ability
Each time you perform an attack that targets a figure adjacent to you, before dice are rolled, you may replace 1 of your power dice with 1 red power die.
Heroic Feat
Use after you resolve an attack. Perform an additional attack that targets a figure adjacent to you. Replace 1 blue attack die with 1 power die of your choice, before dice are rolled. This attack ignores range.
There is more knowledge in the squirming of my prey than in all your dusty tomes.

From her birth, Lyssa's clan called her half-breed, more human than Katjie. They barred her from the sacred rites and forbade her from learning the wild magic. Undeterred, Lyssa taught herself the secrets of her ancestors; she learned how a crow's death warble could reveal a hidden path and how an enemy's blood could improve her blade. Having exhausted the depths of her clan's lore, she now wanders the land, crafting her own collection of secrets.