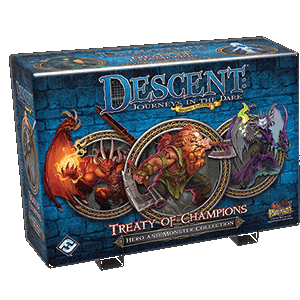 Box of Treaty of Champions

Years ago, a band of legendary champions united to bind a terrible demon and keep it from ravaging the realm of Terrinoth. These champions have recently disappeared into the haunted lands of the south, however, and the magical bonds that imprison the demon are fading. If you would protect Terrinoth from danger, you must gather a band of champions to equal those who came before and face dangers that none have yet encountered.

Treaty of Champions is the seventh Hero and Monster Collection for Descent: Journeys in the Dark Second Edition.

All the cards and sheets found in this expansion are marked with the Treaty of Champions expansion icon to distinguish these components from those found in the base game.