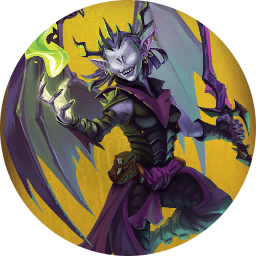 DJ32 Treaty of Champions
Race: Fae
Hero Ability
You may enter blocked spaces and ignore the effects of terrain while moving. You cannot end your movement in a blocked space.
Heroic Feat
Use when a monster activates. Remove your figure from the map and place a hero token in your space. At the start of your next turn, replace that hero token with your figure.
Pursue me all you want; we’ll meet when and where I decide – and there you will die.

Few of the fae from the Aenlong are seen and fewer are known; their race is caught up in the concerns of their chaotic realm. Even among her own people, Zyla is an oddity. She flits capriciously into the realm of Terrinoth, appearing in unlikely and impossible places to strike down her foes with bloody and malicious glee. Though her purpose is her own, she makes a cheerful and deadly companion and she’s eager to pit her strength against a demon lord.

No mortal can be expected to understand the fae, and so none can really claim to understand Zyla. She has flitted through the mortal realm for centuries, appearing when and where it pleases her, usually to visit ruination upon some villain or another. Her cheerful good humor does little to mask a lethal disregard for human life, especially the lives of the wicked. Yet things are changing in Terrinoth, and Zyla has foreseen the end of an age in fire and blood. She accepts this with her same uncaring smile and she hones her eldritch blade to prepare for her next opponent.