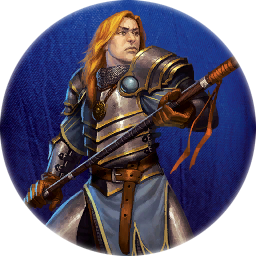 DJ32 Treaty of Champions
Race: Human
Hero Ability
Each hero within 3 spaces of you that has not performed an attack this round adds 1

to each of his defense rolls.
Heroic Feat

for each minion monster within 3 spaces of you. Each time you pass, perform an attack with that monster that targets itself.
My place is between you and the innocent. You have one chance to lay down your blade.

In stark contrast to his present career as a hero, Jonas was raised a thief and assassin in the great cities of Terrinoth. Although his crew targeted the corrupt nobility, Jonas hated his shady and unforgiving life. After the particularly gory slaughter of a noble family, he left it all behind. Joining the order of a remote temple, Jonas found peace and joy in the tight structure of his training, and he now denies his past the right to haunt him. A new path lies before him, one that leads through many lands, always defending the weak and supporting the just.

Runebound: Jonas the Kind was once known by another name—a much darker name, hated and feared by the nobility that he preyed upon. But Jonas ultimately chose to turn his back on a life of murder and theft, spending several years cloistered in a monastery to atone for his sins. Now healed in both body and spirit, Jonas sets out to make a new name for himself as a force for justice. He will not allow his past to control his future, but neither will he forget the man he used to be. Now, with Ariad spreading her evil webs across the realm, Jonas is among the first to stand up for the innocent.'