Stewards of the Secret 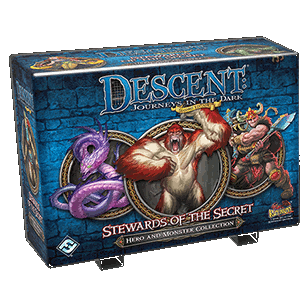 Box of Stewards of the Secret

In the days of Terrinoth’s troubled past, the mad sorcerer Devis sought to create a race of utterly loyal and terrible minions that would serve him without question. His experiments created terrifying monsters that ravaged the realm until a band of heroes destroyed them and their dark master. With a forbidden rite, the heroes bound Devis’s evil knowledge within their own minds, becoming the order of the Stewards. For years, Terrinoth was spared the depredations of these monsters, but now an ancient evil rises to oppose the heroes and unveil the secret they have long protected.

Stewards of the Secret is the eighth Hero and Monster Collection for Descent: Journeys in the Dark Second Edition.

All the cards and sheets found in this expansion are marked with the Stewards of the Secret expansion icon to distinguish these components from those found in the base game.