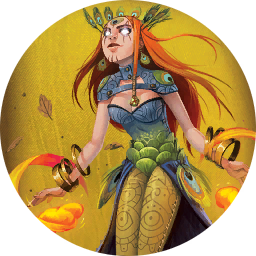 DJ33 Stewards of the Secret
Race: Human
Hero Ability
Figures and obstacles do not block your line of sight. Doors still block your line of sight as normal.
Heroic Feat
Use during your turn to look at the top 5 cards of the Overlord deck. Place 1 of the cards on the bottom of the deck and randomly place the rest back on top.
“Some say they’ve seen the whole of Terrinoth. They are blind.”

Powerful and strange, the young sorceress known as Kel is a mystery to those around her. Many arrogant fools have sealed their fate by believing that her blindness is equivalent to weakness. Aside from the vibrant and powerful displays of magic she wields, Kel often displays an uncanny ability to look beyond present events. Whether she answers a question that has not yet been asked or predicts the actions of her enemies, Kel is a disturbingly helpful ally.

In the Second Edition Conversion Kit, her name was "Truthseer Kel".