Nanok of the Blade

Nanok of the Blade 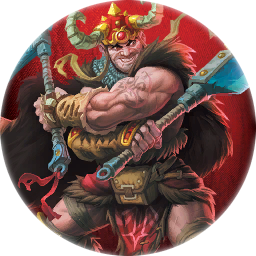 DJ33 Stewards of the Secret
Race: Human
Hero Ability
You cannot equip Light Armor or Heavy Armor.
Once during your turn, you may choose 1 non-large monster adjacent to you. Suffer 1

There are countless mighty warriors in Terrinoth, but in the eyes of Nanok of the Blade, far too many are cowards who hide in metal shells, thinking the skills of a smith can compensate for their own lack of power. Nanok of the Blade scorns these fools—his faith lies not in armor, but in his keen axes and the strength of his arms. In truth, he loves nothing more than the feel of an axe lodging deep in an enemy’s body, and woe betide the fool who dares to meet Nanok face-to-face in battle.