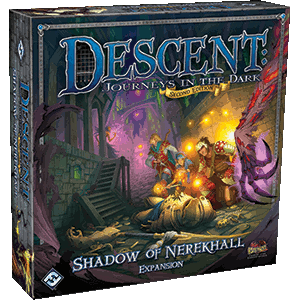 Box of Shadow of Nerekhall

For the epic campaign, see Shadow of Nerekhall (campaign).

Decades ago, the forbidden magical study of Nerekhall’s scholars extended beyond the realm’s capacity for tolerance. A noted mage was driven mad by his experiments and unleashed demonic forces that sent much of Terrinoth spiraling into chaos. Nerekhall’s recovery from its troubled past has been remarkable, but the Daqan Lords keep a close eye on the city and threaten swift retribution should Nerekhall ever allow darkness to rise again…

Recovered from its times of trouble and under heavy threat from the Daqan Lords, the city of Nerekhall stands firm in its declaration: “The shadow has passed.” Yet sinister forces continue to build strength within the hidden corners of the city. They prepare for the day soon to come when Nerekhall, the baronies, and all of Terrinoth will tremble before their might.

Shadow of Nerekhall is the fourth expansion to Second Edition of Descent: Journeys in the Dark.

The new condition added in this expansion is Bleeding.

All the cards and sheets found in this expansion are marked with The Shadow of Nerekhall expansion icon to distinguish these components from those found in the base game.