Orkell the Swift is a playable hero in the expansion Shadow of Nerekhall. 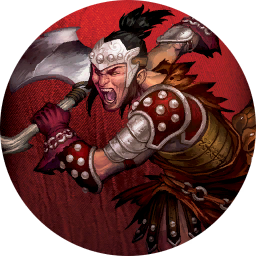 DJ07 Shadow of Nerekhall
Race: Human
Hero Ability
Each time you are attacked by a monster and suffer at least 1

, you may move 1 space after the attack.
Heroic Feat
Use during your turn, while you are knocked out, to perform a stand up action. Then, you may either recover all

or move each monster adjacent to your figure 1 space. You can still perform 2 actions this turn.
Just try to keep up, all right?

Orkell the Swift was once a bandit, exulting in the excitement of daring raids and bloodshed. One fateful day, though, the cries of a child victimized by his band and its raids prompted Orkell to recognize the devastation he left behind. Since that day, Orkell has been forever changed. He remains ever ready to hurl himself into the fray, but he now does so to defend the helpless, bringing swift brutality to any who mean them harm.