Oath of the Outcast 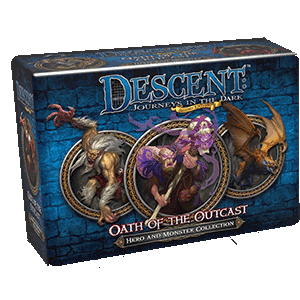 Box of Oath of the Outcast

It is said that the Tomb of the Twelve was created to hold the royal guard of an ancient lich-king. Their remains were bound in sacred linens and sealed in urns of pure silver. A lone guardian ensures that these elite warriors do not rise again. Unjustly banished, the Guardian swore to keep this burial ground in exchange for eternal life and the right to reclaim the honor that was lost.

Oath of the Outcast is the first Hero and Monster Collection for Descent: Journeys in the Dark Second Edition.

All the cards and sheets found in this expansion are marked with the Oath of the Outcast expansion icon to distinguish these components from those found in the base game.