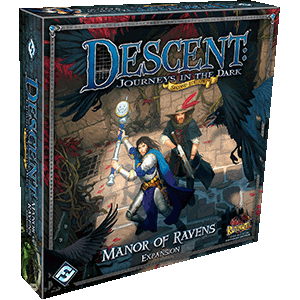 Box of Manor of Ravens

For the mini campaign, see Manor of Ravens (campaign).

In the foothills near Greyhaven there sits a forgotten manor, the haunted residence of the late high mage Ithyndrus. Antique trinkets and artifacts lie within its ever-changing walls, but the ravens that watch the manor are insufficient to discourage treasure hunters and bandits. A new guardian has awoken, and dark forces gather to his aid. Left unchecked, the power and size of this creature will never stop expanding. Its potential is limitless, and it must be stopped.

A raven winged silently over the two figures approaching the tumbledown mansion. Both moved cautiously, with the economy of motion shown by seasoned adventurers. At the moldering wooden doors of the mansion, the woman swung her warhammer against the doors, and they crumbled to dust at her armored feet. The secrets of the ancient manor lay before them…

Within the abandoned manor house, everything was quiet. Furniture lay strewn across the floors, wrecked by bandits and looters. High in the rafters, a raven preened, watching the hall with strangely intelligent eyes. Below, a small creature entered the room and peered about warily. It seemed to be made from pieces of the manor – ruined table legs and bits of statues, with kitchen utensils for fingers. The creature was larger than yesterday. Tomorrow it would be larger still. No one knew it existed. No one was afraid of it yet. But nothing hides forever, and Skarn only needed to grow.

Manor of Ravens is the fifth expansion for Descent: Journeys in the Dark (Second Edition).

All the cards and sheets found in this expansion are marked with the Manor of Ravens expansion icon to distinguish these components from those found in the base game.

It was first announced at the GAMA tradeshow in Las Vegas on March 18, 2014.