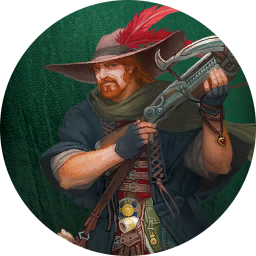 DJ21 Manor of Ravens
Race: Human
Hero Ability
Each time you perform an attack, after dice are rolled, you may cancel the attack and immediately search a search token within 3 spaces of you.
Heroic Feat
Use when a monster enters an empty space adjacent to you. The monster is Immobilized, and you immediately move up to 3 spaces.
We all have debts to pay.

Thaiden has an uncanny knack for finding things that others cannot. He led his clan through the Crags of the Forgotten, rescued his love from the center of the Gray Wastes, and recovered his grandmother’s hairpin from an abundantly large haystack… or so it is said. He never planned to use his talents to avenge the deaths of those he loved. When the murderers were never found, however, he took matters into his own hands. He never speaks about that journey or what he did when he found those responsible. If asked, his eyes grow dark, and he speaks only of what he will do when he finds his current quarry.

Can Thaiden use his hero ability on an attack which missed (rolled an X or not enough range)?

Yes
Thaiden is an expert at surviving in the wilds, and his hero ability and heroic feat give him some of the tricks he may need to get the upper hand on the overlord’s monsters. By using Thaiden’s hero ability, you may cancel your attack and search an adjacent search token instead. By using this ability when an attack would miss or fail to cause damage, you can salvage what would have been a wasted action.
Source[1] Preview of Manor of Ravens expansion