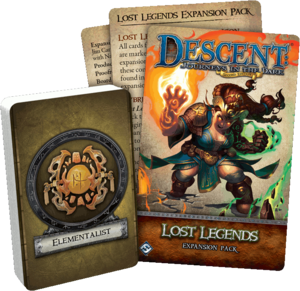 Box of The Lost Legends

The heroes of Terrinoth take on many shapes and sizes. From stoic warriors leading the charge to powerful mages harnessing the power of rune shards to conjure powerful magics and defeat their foes.

Lost Legends is the eighth expansion for Descent: Journeys in the Dark (Second Edition).

All the cards and sheets found in this expansion are marked with the Lost Legends expansion icon to distinguish these components from those found in the base game.