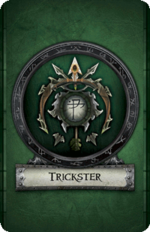 The backside of the Trickster class

Trickster is a class option for the Scout archetype, available to all Scout Heroes. It is part of the second round of Hybrid classes, introduced in Lost Legends. It hybridizes with any class belonging to the Mage archetype.

As a hybrid class, it gets a limited number of skills itself, and cannot gain the high-end skills of the class it hybridizes with. For example, were it to hybridize with the Hexer class, the Trickster would be able to purchase any class card of the Hexer class (as well as any class card of the Trickster class itself) except Plague Cloud or Accursed Arms, since either of those would cost 3 experience points.