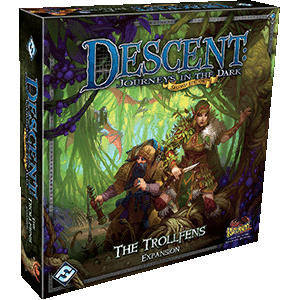 For the mini campaign, see The Trollfens (campaign).

The vicious Bol’Goreth rampages through the wildlands at the edge of the Valdari Marsh, and those left in his wake babble terrifying tales of destruction. However, dark rumors hint at something more sinister behind the simple-minded brutality: something horrific that threatens to spill out across the realm.

Over a small hill and across a stone bridge, you grow alarmed as you behold not a bustling backwater village but wreckage and devastation. Slain villagers lie scattered about the ruins of the settlement, and many of the structures are flattened or torn apart. Through the pouring rain, you see dark shapes moving about the village remains, and though it’s difficult to make out fine details, you very much doubt them to be survivors.

Trolls are not typically known for their fondness of water, so what brings the dim-witted brute Bol’Goreth out of mountain and cave dwellings into the endless damp of a swamp is an important question. Bol’Goreth himself holds no infamy in regards to deeds done, farmhouses flattened, livestock devoured, or anything the like. He displays nothing outside of normal troll behavior, save perhaps being a bit more brutish and a bit less intelligent, if such a thing is possible. Why Bol’Goreth has come to the marsh and what purpose is served in his dealings with the locals is unknown. Could his scheming be the first signs of intelligence in the dull creature, or is he a servant of some other, much more clever foe?

The Trollfens is the third expansion to the Second Edition of Descent: Journeys in the Dark.

The new condition added in this expansion is Weakened.

All the cards and sheets found in this expansion are marked with The Trollfens expansion icon to distinguish these components from those found in the base game.