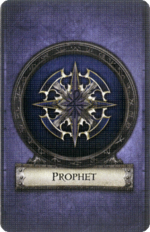 The backside of the Prophet class

Prophet is one of the class options for the archetype Healer.
It was introduced in The Trollfens expansion.

The insight token remains on a Hero sheet between encounters, but not between quests.*

Starting equipment for a Prophet is an Iron Flail , the trinket Sage's Tome, and the skill Soothing Insight.