This article is a stub. You can help Descent-Community Wiki 1.1 by expanding it or adding missing information.

The Shadow Rune is a campaign for Descent: Journeys in the Dark Second Edition, introduced in earlier versions of the base game. 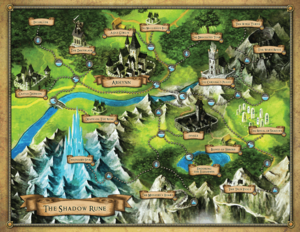 The twin baronies of Rhynn and Carthridge lie on the outskirts of Terrinoth, far from the Free Cities. Baron Greigory often hosts his friend and ally, Baron Zachareth, at his seat in the capital city of Arhynn, and, over the years the two baronies have aided one another in times of both war and peace. But now, both baronies are in peril. Monsters stalk their forests and mountains, moving with more purpose and coordination than ever before. A new Overlord is rising, a wicked and dangerous foe, hidden in the shadows, manipulating events according to his master plan. If the Overlord isn’t stopped, Rhynn and Carthridge alike will fall into darkness, and the rest of Terrinoth will soon follow. Fortunately, a small group of heroes are on the road to Arhynn…