From Descent-Community Wiki 1.1
Jump to: navigation, search
Reynhart the Worthy 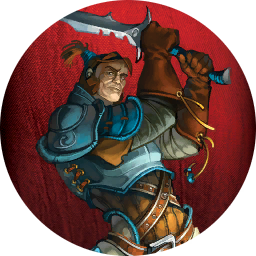 DJ03 Lair of the Wyrm
Race: Human
Hero Ability
If you roll an X during an attack roll, you may suffer 1

and reroll 1 attack die. Limit once per attack.
Heroic Feat
Use after rolling an X during an attack roll to recover all of your

and to reroll any or all of the dice in your attack pool.
I’ve been known to lose, but never to give up!

Descended from a long line of Daqan knights, Reynhart was destined for a glorious career in service to the Citadel. He became a squire for Sir Nessly at the exceptionally young age of nine, and was already competing in melees before his eleventh birthday. Yet, tragedy was overdue for young Reynhart. As he prepared Sir Nessly’s armor for a joust at Baron Zachareth’s annual tourney, he witnessed a cloaked stranger sneaking into his master’s tent, chisel in hand.

Reynhart knew what the man was about, as sabotaging a knight’s armor before a joust was a common ploy implemented by unworthy, treacherous knights. Reynhart drew his sword and mortally wounded the man—who turned out to be Zachareth’s cousin and royal treasurer. Reynhart was forced to flee the tourney or face the block for his crime. Since then he has sold his sword and kept his head low, waiting for a day that he might take his vengeance.

His class is Champion