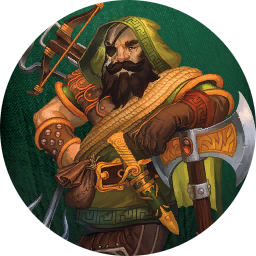 to allow 1 hero on the same map tile as you to reroll an attribute test. He may use your attribute value instead for the reroll.
Heroic Feat
Use during your turn to search a search token adjacent to another hero. This is in addition to your 2 actions on your turn.
Just be careful, I'd wager this place still has a few tricks up its sleeve.

Raythen cannot be chosen as a hero when playing the Labyrinth of Ruin campaign.

Escaping the certain death of the Dunwarr expedition massacre, this clever rogue understands one simple thing: the greater the stakes, the greater the payoff. Not one to be easily frightened off, he knows there has to be something valuable left in Sudanya to create this kind of brutal response. Whatever riches may be found, Raythen just needs to find another group of rubes - or rather stalwart heroes - capable of getting him there.

Raythen previously appeared as an Ally in the Labyrinth of Ruin campaign.