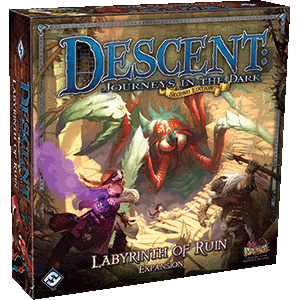 Box of Labyrinth of Ruin

For the epic campaign, see Labyrinth of Ruin (campaign).

An ancient city full of peril and mystery awaits in the ruins of Sudanya, a lost civilization on the edges of Terrinoth. Horrid creatures haunt the heroes’ every step, but powerful allies will guide them through the twisting maze of wilderness and broken cityscape.

Dreams of fortune and glory, untamed lands, and old mysteries have brought you to the edges of Terrinoth, near to the ruined city of Sudanya. Little is known of this place and its people, but tales and legends give naught but high allure to the seasoned adventurer. A dark omen shrouds your steps when you first discover the scattered remains of a Dunwarr expedition to these lands. Dead and burned, the bodies of these explorers transform to caution what was once a sense of excitement. Your destination of the Pylia Caravan, formed into an encampment for several weeks of local trade, lies not far on the road ahead. The expedition’s fate forces you to recall many dark rumors regarding the mysterious city. Sinister forces, terrible magic, and a deep seed of evil led to Sudanya’s downfall, or so it is said. Will you unlock the secrets of the forgotten city, or will this grisly scene prove an ominous sign of things to come...?

Labyrinth of Ruin is the second expansion to the Second Edition of Descent: Journeys in the Dark.

The new condition added in this expansion is Cursed.

All the cards and sheets found in this expansion are marked with the Labyrinth of Ruin expansion icon to distinguish these components from those found in the base game.