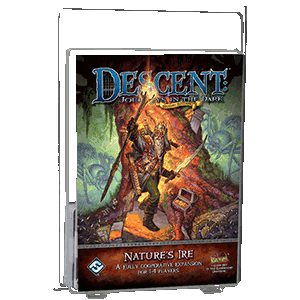 Nature's Ire is an expansion found in the Fall 2014 Game Night Kit for Descent: Journeys in the Dark (Second Edition), enabling one to four players to experience a cooperative mini campaign over the course of a single evening. It has since been released to the public.

The monsters associated with this game night kit are:

The rules can be downloaded from the Fantasy Flight page: Source[1]
Direct link: Source[2]

All the cards and sheets found in this expansion are marked with the Nature's Ire expansion icon to distinguish these components from those found in the base game.