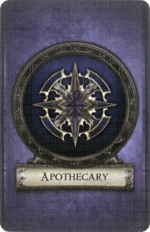 The backside of the Apothecary class

Apothecary is one of the class options for the archetype Healer.
This class was first introduced in the Labyrinth of Ruin expansion.
It utilizes a unique mechanic involving the use of Elixir tokens.

The Apothecary is a walking treasure-trove of elixirs, tonics, and other concoctions. It would be foolish, however, to assume that the Apothecary is a mere peddler of potions; many a foe has made that mistake, only to find themselves choked with poison gas.

Its starting equipment is the Smoking Vials, and the skill Brew Elixir.