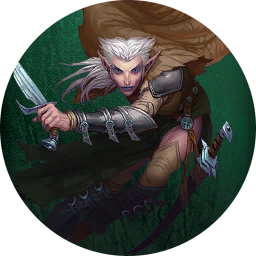 DJ28 Crusade of the Forgotten
Race: Elf
Hero Ability
Each time you perform an attack, you may roll your attack dice before you declare the target. If any attack dice are added after you declare the target, roll those dice during the Roll Dice step.
Heroic Feat
Use after rolling your attack dice to choose 2 additional valid targets for that attack. Each target rolls defense dice separately.
I am a daughter of darkness and a companion of chaos; fate has forgotten my name.

When the Cult of the Forgotten was first born, nine of Terrinoth’s most talented and experienced assassins were given the task of infiltrating the cult of the Forgotten and slaying its leader. Within a month, all but Tetherys had been rooted out and killed. For thirteen years, she devoted herself to the cult and its practices, working her way higher in the ranks. Few believed it was truly her when she reemerged, but the cult splintered and died within days. After, Tetherys wandered the world, but the cult’s resurrection gives her the challenge of ending its threat forever.