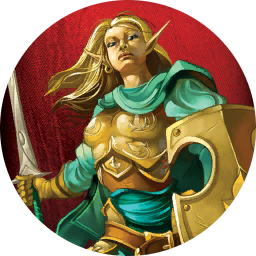 Warrior
DJ01 Base Game
Race: Elf
Hero Ability
If you have not moved during this turn, you recover 2

at the end of your turn.
Heroic Feat
Use during your turn to choose a hero within 3 spaces of you. You and that hero may each immediately perform a move action. This is in addition to the 2 actions each hero receives on his turn.
You swear undying loyalty, yet you are mortal. What can you know of commitment?

Having sworn her blade to the service of Lady Tyviel, Syndrael found herself a scant century later in the awkward position of having her patron named and exiled as a traitor to the Latari elves. Lady Tyviel had the decency to formally release her subjects from their oaths, but Syndrael still found herself with no welcome throughout the Aymhelin. Having concluded that her lady could not be a traitor, Syndrael has followed her into exile. She now travels throughout Terrinoth, upholding the ideals of the Latari as she seeks her lady and an explanation for her fate.