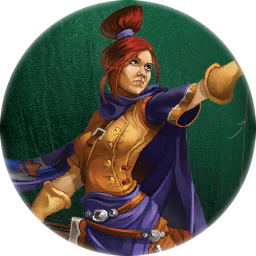 Scout
DJ01 Base Game
Race: Human
Hero Ability
When you suffer any amount of

from an attack, you may choose to suffer some or all of that amount as

instead; you cannot suffer

in excess of your stamina.
Heroic Feat

: You may move double your Speed and perform an attack. This attack may be performed before, after, or during this movement.
Out here in the wilds, I protect those who have misjudged me.

Although Terrinoth has enjoyed comparative peace and prosperity since the Dragon Wars, there are still a dozen small conflicts or wars every year against foes both within and without her borders. Jain Fairwood was a soldier serving under Sir Garrick Whitmore when one of those small wars claimed the lives of Sir Garrick and every man under his command... except Jain. Trapped deep within the Crimson Forest and hunted by the Uthuk, it took Jain nearly six months to escape and return to civilization. Upon her return Jain was branded a deserter, and so she turned about and vanished into the forest again. She dwells there still, emerging from the wild lands only to discharge the duty she still feels to the common folk of Terrinoth.