High Mage Quellen is a playable hero in the expansion Lair of the Wyrm. 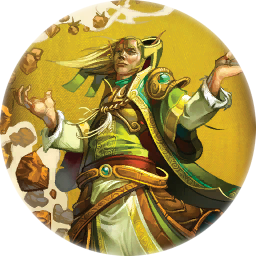 DJ03 Lair of the Wyrm
Race: Elf
Hero Ability
At the start of your turn, you may choose another hero within 3 spaces of you. If the chosen hero has at least 1 fatigue token on his Hero sheet, you recover 1

. If he has fatigue tokens equal to his Stamina, you recover 2

.
Heroic Feat
Use at the start of your turn to increase your Stamina by 4 for the remainder of this turn. At the end of your turn, recover all of your

.
I feed off the wisdom of others, even when it’s less filling than my own.

As Quellen’s dubious title implies, he is an elf that no longer resides within the Aymhelin. The Latari don’t have such ranks within their own arcane institutions, and certainly an elf as young as Quellen would not have risen so high before even reaching his one hundredth year of service to Lord Aenoeth. Quellen’s mysterious link to the natural world drove him to explore the outside world, far away from what he would soon learn is referred to as the “Green Gate.”

Unlike many Latari, Quellen got on well with the other races inhabiting Terrinoth. He enjoyed the naïvety of humans, the craftsmanship of dwarves, the traditions of the orcs, and even the eccentricities of the gnomes. For that reason, Quellen devotes his unique powers to protecting those that gave him his title.