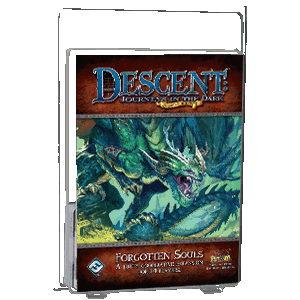 As you begin your journey into the dungeon, corpses that lined the floor begin to writhe to life. Behind you, near the sealed entrance, monstrous beasts appear from the shadows. You must stand or fall together!

Forgotten Souls is an expansion found in the 2014 Season One Game Night Kit for Descent: Journeys in the Dark (Second Edition), enabling one to four players to experience a cooperative mini campaign over the course of a single evening. It became available for purchase per Fantasy Flight Games' Print-on-Demand service in July, 2014.

The monsters associated with this Co-Op Campaign are:

All the cards and sheets found in this expansion are marked with the Forgotten Souls expansion icon to distinguish these components from those found in the base game.