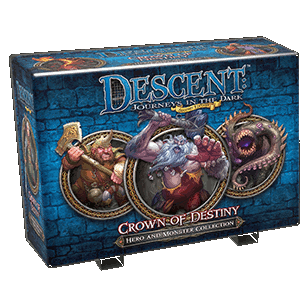 Box of Crown of Destiny

Legends tell of a strange treasure known as the Crown of Destiny. Once mastered, this artifact could change a person’s fate, remaking the past and rewriting the future. For eons, the Crown’s location was lost. But now, its location has resurfaced, and for those brave enough to face a fiery ordeal and battle primal chaos itself, the power to reforge fate is at hand!

Crown of Destiny is the second Hero and Monster Collection for Descent: Journeys in the Dark Second Edition.

All the cards and sheets found in this expansion are marked with the Crown of Destiny expansion icon to distinguish these components from those found in the base game.